No Way to Escape Family Night: On ‘Against Football’ and the Green Bay Packers

Football is a symptom, not a cause: Of the way we’re implicated in all the worst aspects of our country and culture.

Adam, Dan, and Ryan — reading your posts makes me realize, first and foremost, that I am not much of a Packers fan. Or rather, I don’t have much of a problem watching the team I grew up worshipping…unless they start to win. The losses are easy, but when the wins start adding up everything changes. Like last fall, for instance, after the first few games (and after our QB’s sage advice) — and quite possibly this fall too. Then all the old feelings start to kick in: hope, excitement, a seductive sense of urgency.

But that’s not what I want to talk about, after reading Against Football. I felt like nobody could read such a book and avoid deciding one way or another whom they wanted to be in relation to the sport. It reminded me of this scene from The Sopranos. We too cannot say we haven’t been told.

Here’s my problem: Football is my family’s sport, and the Green Bay Packers are my family’s team. This August I went back to Wisconsin for a big family reunion. One of the best moments happened the morning before, though. My nephew Will asked if I would play football with him. We went out to the front yard, and the “play” we perfected had a magic of its own. Here’s a video my stepfather shot of us:

Later on, Will and his brothers, along with my sister, her husband, and my dad, headed north to Lambeau Field and “Packer Family Night.” There they were treated to a gussied-up practice session that concluded with fireworks: 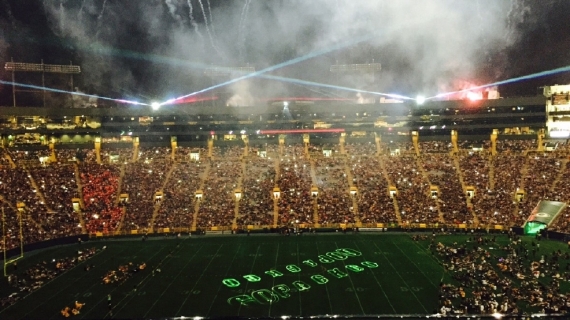 This event was sponsored by Bellin Health, the official healthcare partner of the Green Bay Packers. To which I say, really? And, of course. Football is a symptom, not a cause: Of the way we’re implicated in all the worst aspects of our country and culture. Can I really separate playing catch with my nephew — a moment that reminded me of playing catch with my dad — from the spectacle/indoctrination of the evening that followed? How could I explain the difference to him, between the innocent game we played and the multi-billion dollar business that celebrates and/or denies the destruction of its employees?