Circling Around Something Abstract: On ‘Speak,’ White Space, and What We Do When We’re by Ourselves 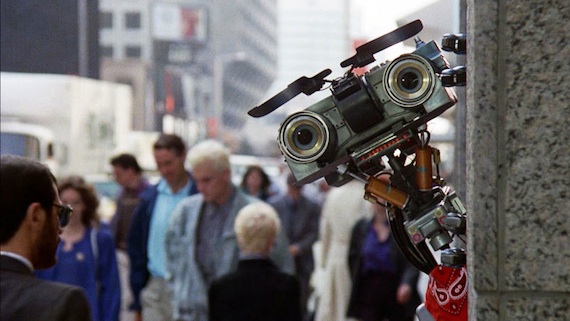 I spent around 90 minutes last Wednesday night (November 4th) on Periscope watching a man and his girlfriend give a tour of their apartment. I don’t know either of them, or rather, I have a pretty good feel for them — I was watching because I already felt like I knew them — but they do not know me. Whatsoever. We are, for all consensus reality purposes, strangers. My wife was working late and when I saw him tweet about his intention to go live on Periscope, it felt like a moderate-sized providence, the sort of good fortune that gets you through a three subway line trip without waiting on a platform. In fact, I installed Periscope for the specific purpose of watching this. I watched his bird do tricks: she pushed a toy car along a table, she flipped around a finger on command, she spun around in place? (I’m unsure about this last one). He showed us his insanely detailed Witcher 3 costume (I’d seen it already). But mostly, he talked about running a Dungeons & Dragons game (he’s probably the closest thing we have to a consensus best-in-the-world at running a game). And I’m super intrigued by the storytelling on the fly he makes look so effortless in the games he runs. (I’m also ridiculously fatigued from my work-in-progress and enamored with any sort of creative endeavor where every single decision is not my sole responsibility.) There were around 800 of us there watching, and I enjoyed the time I was “spending” with him enough that when I my wife did return home, I continued watching.

Those of you who are regular FBC readers will know I’m sort of obsessed with what we do when we’re by ourselves. What we do to artificially feel less alone. In this up-to-the-nano-second modernity, we are given so many ways to bide the time we spend by ourselves (sadly, for us, it’s no longer “read fiction” by default) — I can read an insanely insightful review of Fallout 4 this afternoon and then watch it’s author play the game this evening. Or how about this one, mostly because it’s true: I was going through some pretty serious, antecedentless shit right about the time The Last of Us dropped and completely buried myself in game, as a way of quieting my mind. Which didn’t work, not really, because as I played I noticed interesting narrative choices, which then grew into a full-on theory on the narrative presentation, until for the first time in months, I was writing again. Mostly about the nature of on-rails narrative (applicable to pretty much all forms of fiction that are not choose-your-own adventures and are without end-notes or hyperlinks) but mostly about interactive narrative. Meaning, inspired by this particular video game. And through the course this digital life, I came across someone else on the Internet who was also writing several distinct pieces on the experience of playing TLoU, thousands of words each. And our experiences/theories aren’t the same, not my any means, but what he was thinking and what I was thinking was certainly in conversation with each other. Now because of our current modernity, I can, months later, watch him play the one game that was germane to my childhood (and pretty much my early experiences with storytelling, I’m sad to say). I was fucking invited to watch him experience this for the first time, invited into his living room, with a camera on him and his friend taking up 10 percent of the screen, with the game claiming the rest. I was invited because I follow him on Twitter.

We’re already living in a time when artificially feeling less alone is on tap.

Speak by Louisa Hall swirls through time (ca. 450 years) around the creation, mass-proliferation, and then subsequent interment of anti-lonliness robots. The term is mine; the robots are technically conversation machines — that remember everything and adapt according, becoming quite literally the perfect companion by brute force trial and error. And a large part of the narrative focuses on just how the robots learned to effectively mimic a human conversation. A clockwork structure of people each giving their little piece across all those years, along with their (eventual) reasons for doing so. Why they were compelled to artificially feel less alone. (Which, as an aside, leads to the truly scary aspect of these robots: that they get so good at having conversations with people, that it transcends feeling artificial.)

I agree with RJ — it is all executed flawlessly — and yet for me as well, it was a book I admired without having really enjoyed:

Here’s my fucking problem though: Individually, each subplot is a drag. The narratives work well only as pieces of the puzzle, and the character arcs really overextend themselves. Yeah, okay, Mary missed her dead, soulless dog and is repulsed by her new husband. After a while, Hall needed to either take those plot points to some interesting place , or just let them drop. Turing’s section works a little bit better, especially given the imminence of his chemical castration and death by cynadide. And there’s some narrative movement in the Gaby-MARY3 dialog. But even then, I never feel Hall is building toward anything, and I really wanted her to. This is one of those novel’s that’s mediative to a fault. At the risk of sounding like a philistine, sometimes shit just needs to go down.

I agree wholeheartedly with RJ’s assessment, and yet I don’t think shit going down would fix what I’m feeling. The merits of a clockwork narrative structure are something the two of us have discussed before (here and here and here). TL;DR: I’m an unabashed supporter of this form. I think, for me, it’s less “something needs to happen’”and more of  I’m not sure the use of white space is working. A clockwork narrative swirling around a person, or even a town, can imbue the space between those sections with a reading experience I can best describe as “lived in.” “Experienced, truly subjective” — I’m not entirely sure, but I feel like something magical can happen with a series of first-hand accounts on the same specific subject, and maybe it’s no more than a click or two closer to its Platonic truth. And maybe closer to the Platonic truth is the spot-on way of saying this, because maybe this sort of method is most effective when talking about something corporeal.

But in Speak in the white space it’s loneliness. Or rather, the desire to artificially feel less alone; the desire to replace various sorts of failures to connect with other real people with something artificial. Which then leads, through all these characters’ collective efforts, to a way of feeling less alone that is so effective it does not feel artificial. So that somewhere in the white space, the other real human being in this equation — in the Platonic ideal of this equation; namely, a 1:1 with another human — is eliminated completely. Or even, loneliness itself is eliminated. No one would ever need to feel alone again, not if they didn’t want to. Which works for me right now, as I’m writing it — that is a fucking dope thing to have the white space do — in theory. In paraphrased form in a blog a about quitting the NFL to read books. But it didn’t come off for me that way as I was reading. Not really.

But I kind of wish it did.

← Coming Home Again: On Books, Travel, Life, More Books, and the Green Bay Packers
Jumping the Rails: On ‘Slade House’ and Not on ‘The Sixth Extinction’ →